Żyrardów is a town and a commune in the Mazovian voivodeship in the Żyrardów district,  located in the Łowicz-Błonie Valley on the River Pisia-Gagolina. The town’s history begins in 1833, when a linen factory was set up in a village called Ruda Guzowska, which was part of the estate of the aristocratic Lubienski family. The mechanized spinning of linen was organised on the initiative of the government of the Kingdom of Poland by Filip de Girard. In 1845, a steam train on the route between Warsaw and Vienna went through Żyrardów. In 1857, the factory was purchased by Karol Hiell and Karol Dittrich, who supervised its extension, as well as the building of a settlement for the factory workers (this was continued by their successors, including Karol Dittrich Jr.). It included workers’ housing, a laundry for them, a hospital, schools, a nursery, a factory merchant club and Catholic and Protestant churches. In 1939, the German army entered Żyrardów. There was a camp for Polish prisoners of war in the town, and a Jewish ghetto, the inhabitants of which were sent on to the Warsaw ghetto, and, from there, to the Treblinka concentration camp, where they were murdered. During the wartime occupation, conspiratorial activity was organised in Żyrardów. The town was liberated in 1945. In 2012, the President of the Polish Republic recognized the 19th century Factory Settlement as a Historical Monument.It stands as a unique and valuable witness to the over 100 year tradition of linen production in the town, and a symbol of its connection with the fabric industry in the Kingdom of Poland. It is one of the first modern residential centres with such variety in its organisation, constituting an example of attractive and consistent urban planning, as well as presenting buildings of architectural interest.

number of parishioners in Żyrardów deanery

number of parishioners in Mszczonów deanery

number of parishioners in Wiskitki deanery 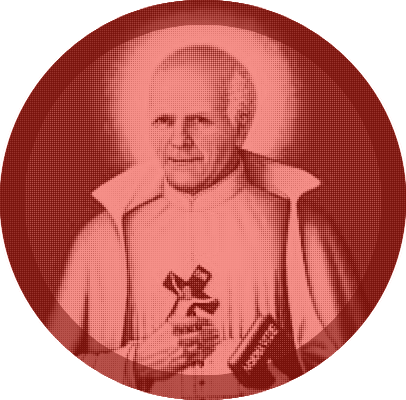 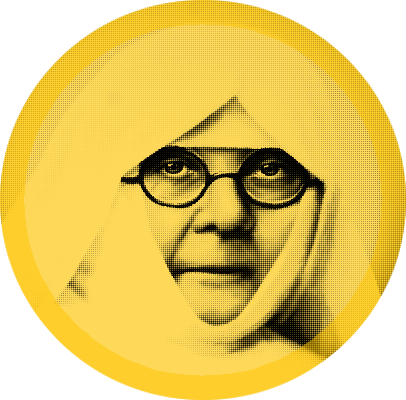 Blessed Marcelina Darowska (religious name: Maria Marcelina of the Immaculate Conception of the Blessed Virgin Mary 1827 – 1911) was born in Podole. At first she helped her family in managing their estates and taught local children religion. She did not forget the sick either. At her father’s request, at the age of 22, she married, however, following the deaths of her husband and son, she left for Rome, and took a private vow of chastity. It was here that she founded, together with Josepha Karska, the Congregation of the Sisters of the Immaculate Conception of the Blessed Virgin Mary. As Superior General, she committed herself mainly to educational ministry, establishing boarding schools for girls. At her request, the figure of Our Lady of Jazlowiec, famed for its graces, was created. The statue was moved to Szymanów after World War II. 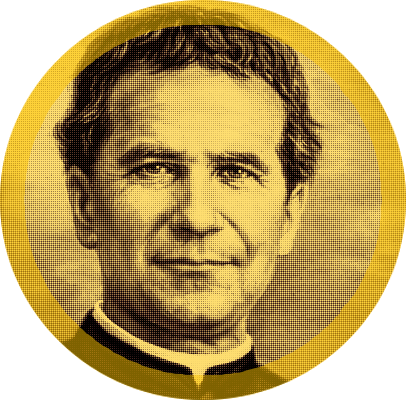 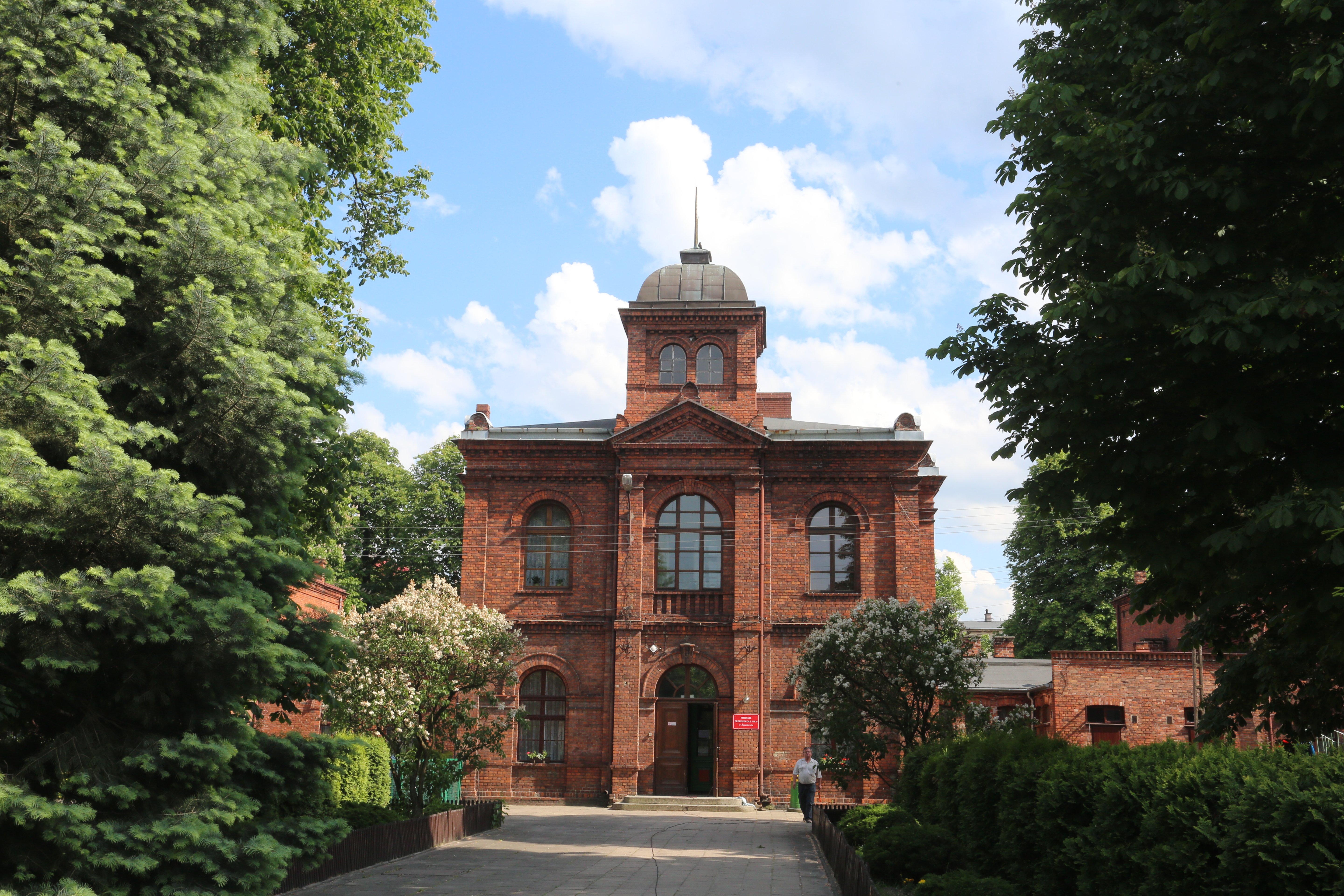 Żyradów Factory Settlement – a model example of a 19th century industrial settlement, which has qualified as a historical monument. The linen plant here was one of the largest in Europe. The construction of unplastered brickwork is typical, and creates, here in Żyradów, a unique collection of urban architecture, which, despite the cessation of linen production, has retained its character as a working-class settlement.

The Shrine of Our Lady of Jazłowiec, Szymanów –the convent chapel of the Sisters of the Immaculate Conception of the BVM and home to the statue of Our Lady of Jazłowiec, which was brought here from the convent in Jazłowiec in 1946, when the Sisters were ejected by the Soviets. The figure reflecting dignity, radiance, and inner contemplation is an expression of virginity, purity and motherhood. 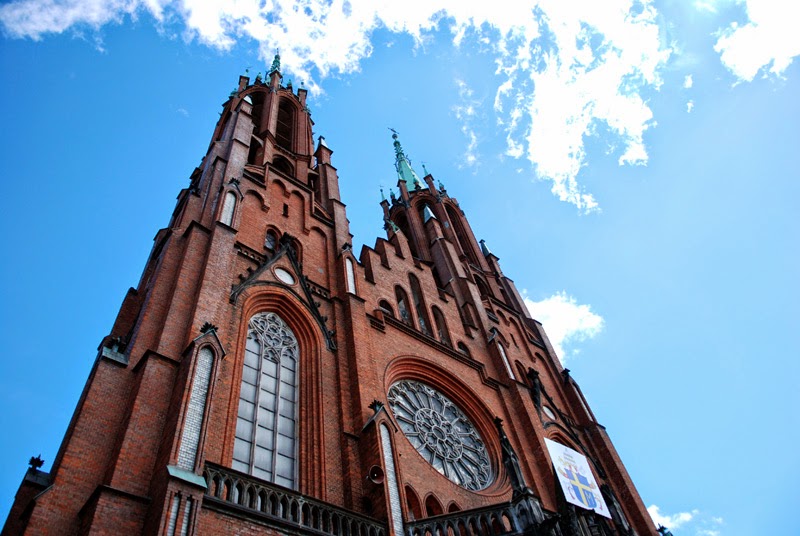 Our Lady of Consolation Parish Church – a Neo-Gothic building featuring a monumental façade with two spires. The interior is enriched by an altar, music gallery and organ, pulpit, stations of the Cross, and stained glass windows, some of which were designed by Józef Mehoffer. 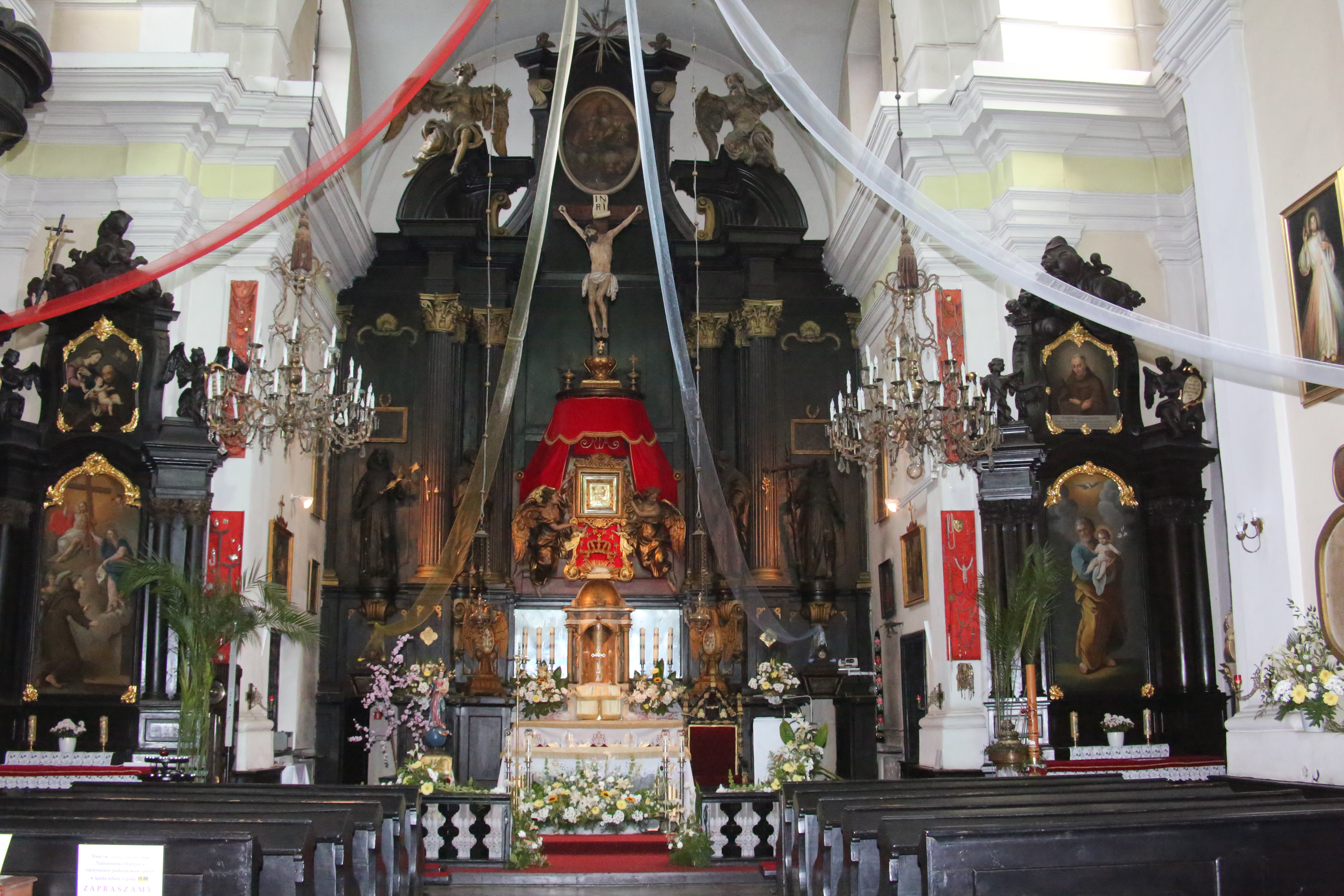 The Shrine of the Holy Family, Miedniewice – the shrine’s history, which involves the veneration of a miraculous picture of Our Lady of the Holy Family and Mazovia, dates from the end of 17th century. Between 1675 and 1825, there were 433 instances of miracles and supernatural graces in Miedniewice. These are recorded in the chronicles of the monastery. The shrine is currently under the care of the Franciscans. There is also a convent of Poor Clares in Miedniewice.

Radziejowice Palace – a palace in the classicistic style complete with a surrounding park, which has hosted many eminent guests from Poland and abroad, including kings: Zygmunt III Waza, Władysław IV, and Jan III Sobieski, writers and artists, including: Henryk Sienkiewicz, Józef Chełmoński, and Jerzy Waldorff. The palace currently serves as a venue for artistic events. Concerts, exhibitions, theatrical productions, and open-air events are held there. 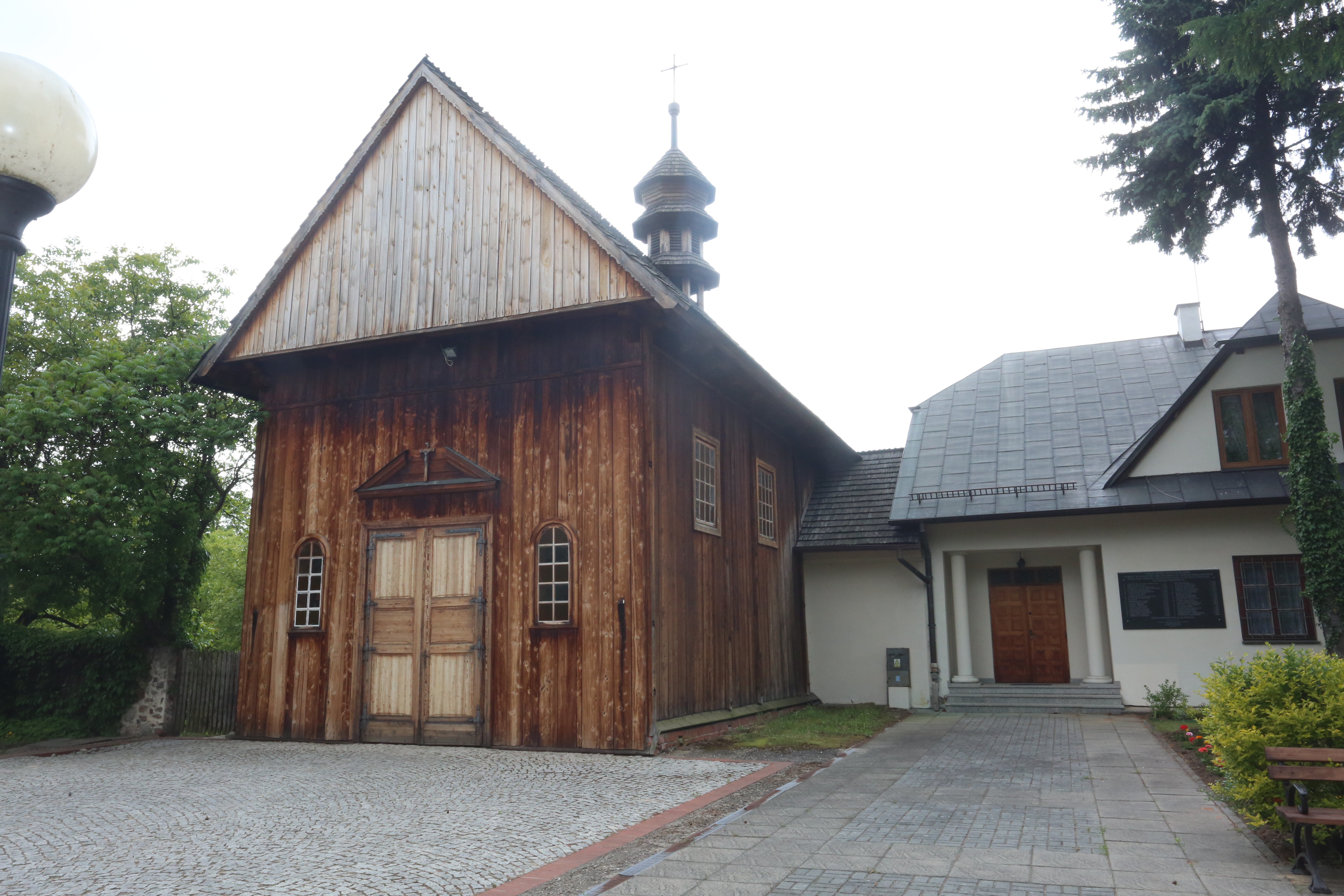 The Convent of St. Michael the Archangel, Puszcza Mariańska – home and oldest monastery of the first Polish male religious Congregation, the Marian Fathers of the Immaculate Conception of the Blessed Virgin Mary, founded in 17th century, by blessed. Fr. Stanislaw Papczyński. King Jan III Sobieski stayed here on his way to Vienna in 1683. 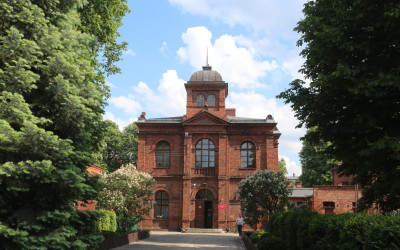 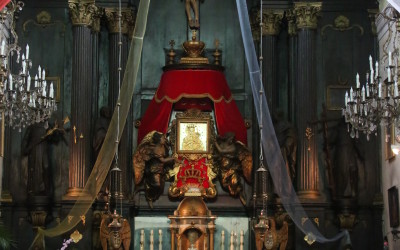 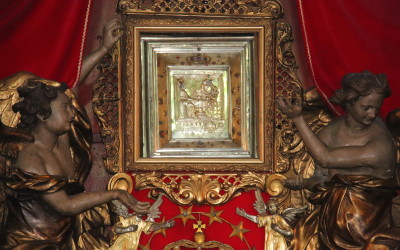 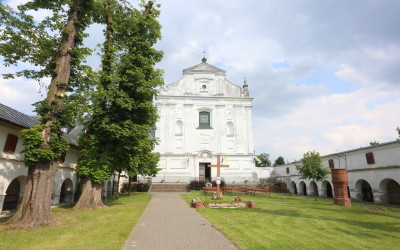 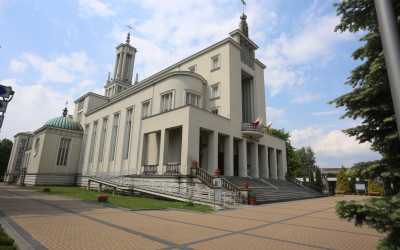 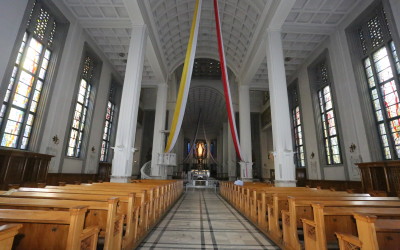 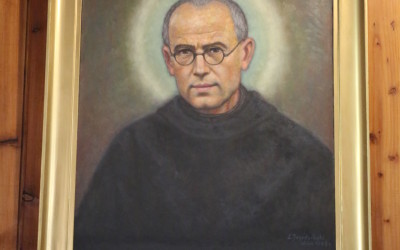 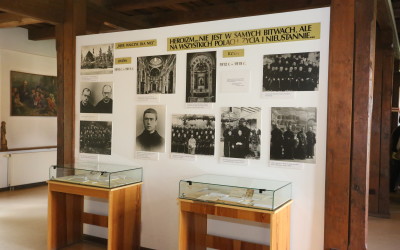 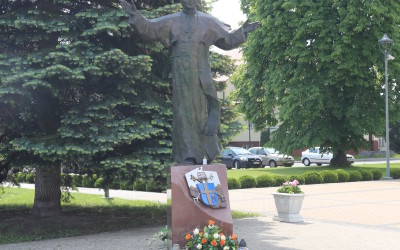 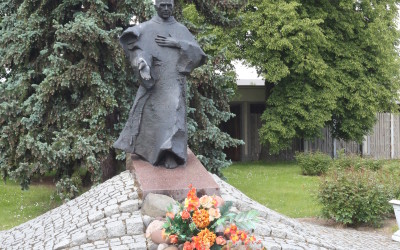 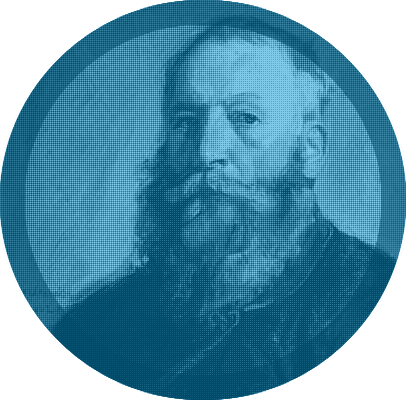 In the mid-19th century, in a village called Boczki, near Łowicz, became the birthplace of Józef Marian Chełmoński (1849 – 1914), known all over the world as a painter representing the school of realism. He learnt to draw in the Warsaw School of Drawing, and in the studio of Wojciech Gerson. He later studied at the Munich Academy. Chełmoński travelled all over Europe, and finally purchased the small manor house in Kuklówka near Radziejowice. His paintings were mainly of nature, the face of which he represented with great authenticity. Among his works are also to be found pictures of Polish and Ukranian village life. His most famous paintings include, Departing Cranes, Indian Summer, Four-in-Hand Storks. An exhibition of some of his work can be viewed in Radziejowice. 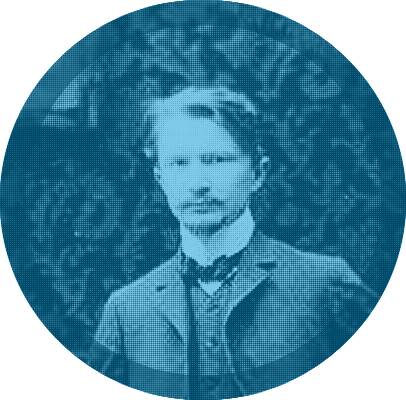 Paweł Hulka – Laskowski (1881 – 1946), was a Polish campaigner, writer, publicist, and translator. He was born in Żyrardow, where he also spent his childhood and youth. He was the creator of the first workers newspaper in the town, The Żyrardow Echo (Echo Żyrardowskie). He also translated the works of such authors as Jonathan Swift, James Fennimore Cooper, Ernst Kretschmer, Emil Ludwig, and Roger Martin du Gard, into Polish. However, his best-known work of translation is that of The Adventures of the Good Soldier Szwejk by Jaroslav Haska.